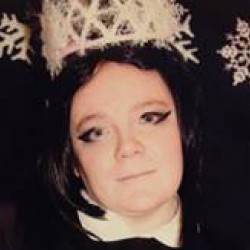 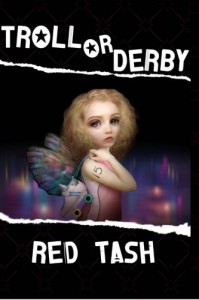 I really wasn't sure what to expect coming into this book. The story turned out to be nothing like I expected. There are so many twists and turns, it fells very jumpy at times. I enjoyed it but it is definitely an acquired taste.

I like Deb and her spunky attitude. She is a bit of a tough girl, she is also a lesbian, which is rather vague for most of the book. It is said more in insults to her clothes and general demeanor, she makes mention of it herself, but it was such a passing comment you almost miss it. I enjoyed her narrative, she really is a sassy little thing. It must be a huge thing to discover you are not who you thought and everything around you is not what it seems.

Harlow is the other half of the narrative, he is a great character. I loved his snarky troll thoughts. He is just trudging along and then bang, life smacks him in the face. It takes time to really get into who he is and how her grew up. Once you get all the details, the murky story comes together.

The supporting cast is mostly bad guys, but hey, they are the meat of this tale. As things develop you see how Deb and Harlow have had to grow in a really negative atmosphere. The skating isn't key until later in the story, I thought there would be more roller derby throughout. Perhaps in the next book.

I listened to the audiobook narrated by Stephanie Bentley, who is incredible! She is seriously talented and at one point I really thought there must be two narrators. The Harlow sections are so well done, I actually had to check and see if they were being done by a man. Such a fantastic job of changing the tone and keeping the read consistent. Her energy feeds into the action of the story and the emotions come through vibrantly. I am such a fan of her read, I am going to go see what else she has ASAP! Another one for my stalking...um following list.

I was intrigued by this story and thought if flowed nicely. It does tend to go off on what appear to be tangents, they are connected but at the time they just felt like rambling. Still, I am very interested in seeing what is next for this series. It is a very modern sort of fairy tale, in the gritty traditions of the Brothers Grimm.

Disclosure - I received a copy of this book in exchange for an honest review. All thoughts, opinions and ratings are my own.
Tweet